Life membership is an honour bestowed on individuals who have made an outstanding contribution to National Disability Services.

Ken Baker has made an invaluable and significant contribution to NDS, the Australian community services sector and the wider disability community.

Disability advocacy is a cause that has always been close to Ken’s heart. His dedication goes above and beyond just a ‘job’ and has seen him awarded with a Centenary Medal and a Member of the Order of Australia.

Ken led NDS as Chief Executive from January 2000 until September 2018. 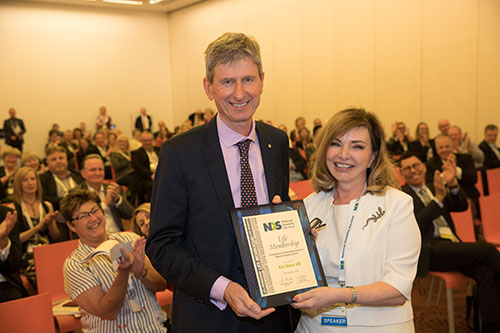 Caption: Ken Baker AM being presented with a Life Membership plaque by NDS President Joan McKenna Kerr, at the 2018 NDS Annual General Meeting.

Jason has been the CEO of Job Placement Limited an Open Employment Service in Logan City Queensland since 1990. He has been actively contributing to the work of National Disability Services since that time.

Jason chaired the National Committee on Open Employment for over 11 years and represented NDS on a number of working groups. Jason’s deep knowledge of disability open employment has informed NDS’s policy work and our influence on government.

In 2010, Jason was presented with the NDS President’s Award to acknowledge his excellent and long-term contribution to National Disability Services.

In addition to his work on disability open employment, Jason has been a strong advocate for NDS’s involvement in international development.  Along with the staff of Job Placement, Jason has been sponsoring an inclusive school in a rural area of Bangladesh since 2000.  The sponsorship covers all expenses at the school and provides children with lunch each day.  Due to the increase in enrolments at the school, in 2007 a block of land was purchased and a new school constructed.  There are currently 165 children attending the school.

In 2007, he initiated a micro-credit program to fund self-employment ventures where traditional employment options are non-existent.  Young people with disability and their mothers now own cattle and sell milk at the local markets.  There are currently 55 families involved in the project.  As the families repay their interest free loans, more families will be assisted. 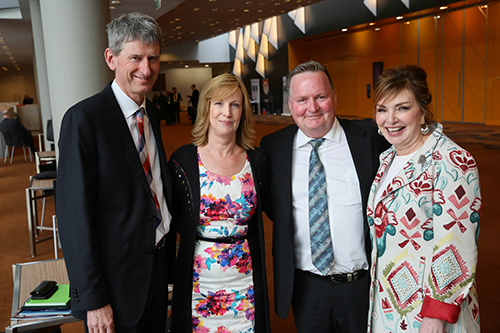 Bryan Woodford worked in the disability services sector from the early 1980s until his retirement in 2008. This included five years as the CEO of the Koomarri Association in the ACT and 11 years as Yooralla’s Managing Director in Victoria. He was awarded a Centenary Medal for his services to people with disability.

Bryan’s services to NDS were extensive. He was a Board member for 14 years, including as Senior Vice President from 1997-2000 and President from 2000–2003. He was the Chair of the Governance Committee, founding Chair of the National Social Participation Committee and held positions on National Committees for Australian Disability Enterprises and Occupational Health and Safety.

He represented NDS on two key government advisory committees concerned with the reform of disability employment services. Through a paper at the CEO Meeting, he initiated discussion about the impact of casualisation on the disability services workforce. He continues to contribute to debate within the disability sector and gave an insightful presentation at the 2010 Employment Forum on building alliances among ADEs.

Bryan also had a keen interest in overseas aid issues, and acted as an Australian representative at several international forums, including those of UN ESCAP and Rehabilitation International.

In all these roles with NDS, Bryan was never less than well-informed, energetic and constructive. As a leader within the disability sector he managed to challenge the views of others without losing their respect or support. He deserves the honour of Life Membership. 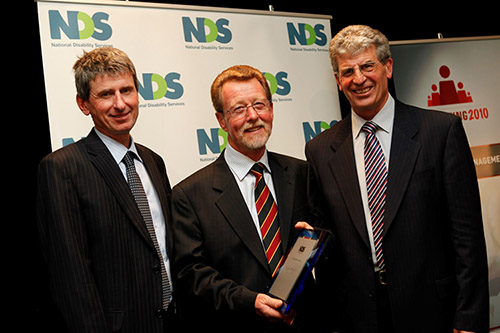